A month of travel by Chris D'Elia - Future Earth Coasts

Since my first research trip abroad to the Marshall Islands as a graduate student over 40 years ago, I’ve had a deep appreciation of the value of international experience in enhancing my own education and research.  My recent, back-to-back trips in October, 2016, to Cuba and China respectively, strongly reinforce this long held appreciation, and they convince me more than ever that we need to redouble our efforts to provide similar opportunities to our students at Louisiana State University (LSU), where I serve as professor and dean of the College of the Coast and Environment. Our faculty understands the need to learn in an international environment and conducts research on every continent and in all oceans. This understanding needs to be instilled in our students, and study-abroad opportunities and student exchanges are ideal ways to expose them to global challenges.  All great universities promote such opportunities and exchanges.

This was my first visit to Cuba. I was a member of a Louisiana trade mission led by our state’s Governor. Pictured with me to my left in the photo below on the grounds of the residence of the U.S. Ambassador to Cuba is Governor John Bel Edwards and to the right LSU Vice President for Research K.T. Valsaraj, and LSU Honors College Dean Jonathan Earle. 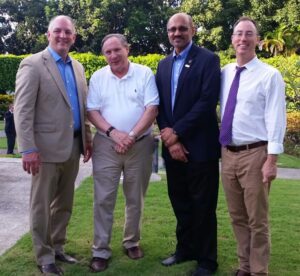 It was my third visit to China as an LSU dean, and this time, I was invited and hosted by Xiamen University (XMU) in Xiamen and East China Normal University (ECNU) in Shanghai. Both Chinese universities have active programs of international engagement and have collaborated with researchers at LSU.  In addition to our present joint research activities, our Chinese counterparts and we hope to expand bilateral faculty, staff and student exchanges.  (In a similar vein, LSU would like to see similar exchanges develop between LSU and Cuban and other Gulf of Mexico universities as well.)  Pictured with me below is my counterpart at XMU, Qingshun “Quinn” Li, Ph.D., Professor and Dean, College of the Environment and Ecology, with whom I signed an MOU for cooperation to foster joint research and faculty/student exchanges. 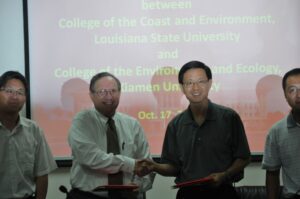 In addition to my other roles at LSU, I also direct the Future Earth Coast’s North American Regional Engagement Partnership. This is another significant opportunity for international collaboration for LSU’s faculty, staff and students, and as Future Earth Coast’s North American representative, I would like to see even broader participation.  ECNU, as a “Regional Node,” played a similar partnership role for Asia in the LOICZ program, and ECNU also hosts the Asian Regional Project Office of IMBER (Integrated Marine Biogeochemistry and Ecosystem Research).  Both LOICZ and IMBER began as part of the International Geosphere-Biosphere Program (IGBP), which ended two years ago and succeeded by Future Earth. Both programs have collaborated in the past, and aim to continue to collaborate as part of Future Earth.Pictured below are the participants of the meeting I attended at ECNU, The Third SKLEC (State Key Laboratory in Estuarine and Coastal Research) International Consultation Meeting and Workshop on Estuarine and Coastal Research. To my right is my LSU colleague, Sam Bentley, and just behind him to the right, is another LSU colleague, Jun Xu.  To my left is Prof. Zhongyuan Chen of ECNU, with whom several LSU colleagues and I have published papers together in the past that compare deltas in China, the US, and elsewhere.  That is just one benefit that international collaboration yields. 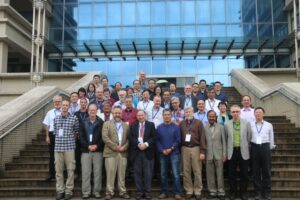 I have been involved with LOICZ/Future Earth Coasts almost from its inception in 1993. I attended the 1995 Open Science Meeting in Manila. While a lot of the program’s focus has been on the fluxes of sediments and nutrients in the coastal zone, there has also always been great emphasis on the societal relevance of the program’s scientific findings. So, too, has there been a clear focus on changes in the coastal zone, be they demographic, economic or climate-related. The goal of LOICZ was “to provide the knowledge, understanding and prediction needed to allow coastal communities to assess, anticipate and respond to the interaction of global change and local pressures which determine coastal change.” That goal is still pertinent now.

By almost any measure, as part of the IGBP, LOICZ was a successful international venture — I give one compelling example of that success below.  Now re-envisioned as an element of Future Earth as “Future Earth Coasts,” its new mandate is “to support sustainability and adaptation to global change in the coastal zone working with Regional Seas to identify future scenarios that provide more sustainable options than current ‘business as usual practices’.”[1] This new challenge is daunting, but essential in a world facing a human population that can conceivably reach or exceed 12 billion, many of whom live within 100 km of the coast.

Why are these international programs so important?  The answer lies in the ways that understanding of the earth’s coasts makes scientific advances. Coastal scientists rarely have the ability to do large-scale, ecosystem experiments and manipulations.  Accordingly, we must use other approaches to understand the systems we study.  Generally speaking, these approaches include systematic observations and monitoring, studies of change in ecosystem structure and function over time, and comparative studies of different coastal systems.   The latter have been of particular value to LOICZ/Future Earth Coasts, as is apparent from a recent review of the program’s history.[2]  A number of important synthesis papers have been published by LOICZ-associated scientists (Syvitski et al., 2009[3]; Giosan et al., 2014[4]). In a particularly noteworthy collaboration, Giosan et al. (2014) showed that sediment input to the majority of the world’s deltas is insufficient to maintain elevation with respect to rising relative sea level, one of the most compelling coastal concerns. There can be no doubt that the broad realization of the serious threats now facing the world’s deltas was facilitated by the frequent interactions in LOICZ of researchers studying deltas around the world.

The rising sea also has serious implications for maritime trade because ports and harbors have to adapt to it—in the case of Louisiana, the Ports of South Louisiana, New Orleans and Baton Rouge combined constitute the largest bulk shippers in the US, and all are threatened by the rapid rates of subsidence in the Mississippi Delta.  Many other ports are also in deltaic regions, so as in Louisiana, there are particular concerns for their long-term viability.

At the global scale maritime trade is becoming increasingly important, and with the widening of the Panama Canal, new patterns of trade are opening up.  Our trade mission learned that Cuba aims to capitalize on new trading opportunities at its port of Mariel, where it has established the Special Economic Zona of Mariel (La Zona Especial de Desarrollo Mariel or “ZED”).  ZED General Director Charles Baker explained to our group he was hopeful of the early expiration of the US embargo of Cuba and the law that prohibits any ship from visiting a US port within 180 days of a visit to a Cuban port.  At that point, ZED aims to serve in hub-and-spokes model to receive PANAMAX vessels and transfer their cargoes to smaller container ships bound for US Gulf and East Coast ports in Louisiana and elsewhere.

The burgeoning maritime trade, which has doubled from 1985 to 2007, has significant positive economic effects for many nations, but there are also some concerns about environmental impacts. The International Maritime Organization has recently undertaken a detailed bottom-up fleet inventory and has found that international maritime activity emitted a total of 1,120 Mt of CO2–more than twice an earlier IEA estimate for 2005.[5]  To put this estimate in perspective, international maritime emissions would rank 6th between India’s and Germany’s CO2 emissions. In terms of energy use, the Virginia-based Center for Climate and Energy Solutions has stated that “the global marine shipping sector is responsible for approximately 1.5 percent of global greenhouse gas emissions from anthropogenic sources.”[6]

Louisiana, Cuba and China all share another, troublesome problem.  All three locations suffer great vulnerability to late summer and fall tropical storms, which according to some scientists could become stronger and more frequent with climate change.  Louisiana and Cuba have strong hurricanes. China has strong typhoons.  In fact, Super Typhoon Meranti struck Xiamen in mid Sept. with wind gusts up to 280 kph (~150 knots), and while we were in Cuba, Hurricane Matthew stuck the east end of that island.  Great progress has been made in our ability to use numerical models to forecast landfalls for these storms, but there is still much progress to be made in forecasting storm strength and storm surge from these extreme weather events. This, too, is an area of vital and active research and international cooperation that is very pertinent to LSU, its Cuban and Chinese counterparts and Future Earth Coasts.

My October travel marathon ended with the fall meeting of the Consortium for Ocean Leadership (COL) in Washington, DC. I serve on the Executive Committee of the Board of Trustees of that organization, which is the leading voice for ocean-related research and education in Washington, DC. 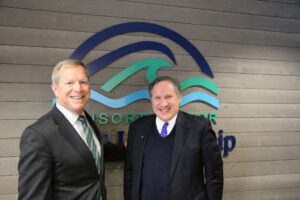 In the photo left, I am pictured with COL President and CEO, RADM Jonathan W. White, USN (Ret.).  Admiral White served as Oceanographer of the Navy, and is very familiar with the huge challenges posed by coasts and coastal seas. As one of his colleagues once remarked, “You may have noticed that Navy bases tend to be located at sea-level, so the Navy is very concerned about sea-level rise.” So, too, are navies from other countries around the world. Yes, coastal change is a topic of international concern, and likewise is having the research resources needed to study it.  We are fortunate in the US to have an organization like COL representing the research and education interests of our academic community.
In summary, clearly, the challenges of the coast are many: economic, environmental, climatic, meteorological, strategic, and demographic, to name a few. It is both exciting and daunting to have a position that puts me on the front lines of “the battle of coastal change.”  There is plenty of work to be done yet, for sure, and this requires international collaboration.