A Blue Urban Agenda: Adapting to Climate Change in the Coastal Cities of Caribbean and Pacific Small Island Developing States 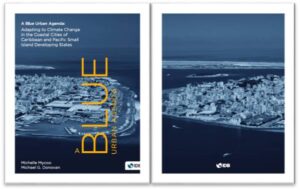 cientific Steering Committee member of Future Earth Coasts, and coordinator of the Caribbean Regional Engagement Partner Node at University of the West Indies, Michelle Mycoo is lead author of a new publication on building capacity to adapt to climate change and increase resilience in cities in coastal zones in small island developing States (SIDS), especially those experiencing rapid urbanization.

The IDB website says that over the past two decades, national and local governments in Caribbean and Pacific Small Island Development States have partnered with the donor community to implement over $55 billion in development programs, many of which focused on climate change adaptation. The coastal cities of the Caribbean and Pacific SIDS are among the world’s most vulnerable cities to rising sea levels and coastal erosion.

Currently 20% of the population of these countries, or 4.2 million people, live in low elevation coastal zones that are prone to flooding. Despite the financial burden of adapting to rising sea levels and natural hazards, SIDS are leveraging opportunities to minimize these effects through an emerging Blue Urban Agenda. This research evaluates the lessons learnt from urban coastal adaptation programs in SIDS and provides several policy recommendations to comprehensively address city resiliency to climate change.

An institutional mapping of donors active in coastal adaptation in SIDS and a review of more than 50 donor-funded projects highlights the most effective coastal adaptation programs. Comparisons are provided between the Caribbean and Pacific SIDS on climate change, urban development, housing, and access to climate funds.

This book provides a way forward to embark on a Blue Urban Agenda that is sensitive to the unique characteristics of SIDS and their commitments in the Small Island Developing States Accelerated Modalities of Action (Samoa Pathway) resolution, COP21, the Sustainable Development Goals, and Habitat III.

This publication is also downloadable from the Inter-American Development Bank.

For African consumers, fish and other fish products make up around 18% of all animal protein intake. Fisheries and aquaculture...

We are delighted to share with you a recent paper by FEC fellow Lena Rölfer and colleagues. This new publication highlights the...

A new publication is out now, and the first coming from FEC to be published in Anthropocene Coasts! Lead by FEC Fellow Kyle...