Why did Liangzhu Culture in the lower reaches of the Yangtze River suddenly rise then?

How did people live at that time?

How did they carve those exquisite jade articles?

How did they build the magnificent city?

Why did the brilliant Liangzhu Civilization abruptly decline?

Did they really disappear?

The team has found important environmental factors that triggered the decay of Liangzhu Culture.

Liangzhu was one of the archaeological cultures of the Neolithic Age in China. It emerged about 4000 to 5300 years ago and developed in the area around Taihu Lake in the lower reaches of the Yangtze River. More than 500 sites have been found, with Mojiao Mountain near the Liangzhu Sites as the center area.

Its capital was located in Hangzhou — Liangzhu Ancient City was composed of a palace area, an inner city and an outer city, and a large water conservancy project outside the ancient city. It also had several sub-level regional centers in Zhejiang, Shanghai and Jiangsu. So far, thousands of common sites have been found. And it is a hierarchical society with a pyramid-like structure composed of three classes: civilians, nobles and the ruling class. 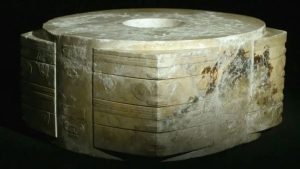 Archaeological findings also show that it was a complex society based on wetland rice farming and livestock raising, and had a variety of specialized handicrafts such as jade, stone, lacquer, wood, pottery, textiles, etc. Liangzhu was a peak of East Asian prehistoric culture. However, Liangzhu Culture began to decline about 4500 years ago, and the former imperial city was inhabited by ordinary people. The outskirts of Liangzhu Ancient City were widely covered by flood deposits. Eventually the ancient country disappeared. Its disappearance remains an ancient mystery and has puzzled people for a long time. 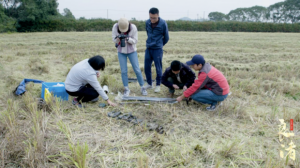 In 2018, Professor Wang Zhanghua’s team at the State Key Laboratory of Estuarine and Coastal Research, East China Normal University, collaborated with the Ningbo Institute of Cultural Relics and Archaeology and the Archaeological Department of Shanghai Museum, conducted research on the stratigraphic record of the Yushan site in Jiulonghu town, Zhenhai, Ningbo, Zhejiang province.

Thereafter, based on the stratigraphic record of the Yushan site, Wang Zhanghua’s team applied numerical models and  demonstrated that the relative sea-level rise at the end of the Liangzhu culture was not merely a localized increase in tidal water level, but had a broader regional significance.

At the same time, they also proved that the storm deposition in the Yushan site was shaped by a super typhoon with the situation of sea level rise. The research results of Wang Zhanghua’s team have been widely recognized by the archaeological community. 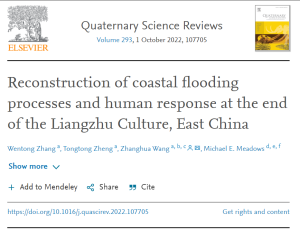 Recently, Wang Zhanghua’s team obtained stratigraphic records at the Liangzhu Ancient City to reproduce the evolution of flooding disasters with more details in the coastal zone due to sea-level rise at the end of Liangzhu culture. They pointed out that the climate and sea-level changes at the end of Liangzhu culture are very similar to the climate situation we are currently facing, which are global warming and accelerated sea-level rise.

Therefore, the flooding evolution at the end of the Liangzhu culture made us realize that we will soon face more frequent seawater intrusion, more intensified typhoons, higher storm surge tide levels, and more prone to stormwater accumulation.

Wang Zhanghua initially believed that the sea level rise occurred after the Yushan storm because the stratigraphy in the Yushan site was eroded by the storm at the end of Liangzhu culture and errors of OSL dating of storm deposition were large.

Subsequent numerical simulation and a more continuous stratigraphic record of the Liangzhu Ancient City confirmed that the storm event occurred more likely after sea level rise had begun to accelerate.