The Environmental Sciences Laboratory (ESL) at the Biosciences and Biotechnology Center and Anthropic Space Studies Laboratory (ASSL) at the Human Sciences Center is part of the Universidade Estadual do Norte Fluminense (UENF), a public institution established in 1993. UENF is committed to providing its students with an educational experience conducive to learning, persistence and academic success, especially in Environmental and Marine Sciences. The institution has 300 teachers, 700 technicians and 6500 students distributed across16 undergraduate courses and 14 graduate courses.

Building on a workshop held by the National Institute of Science Technology (INCT) at Fortaleza, Ceará, Brazil in 2011, where LOICZ’s Dr. Hartwig Kremer evaluated the project “Transfer Material on Interface Continent – Ocean” funded by the Brazilian National Council of Science and Technological Development (CNPq), Prof. Luiz Drude de Lacerda, the principal investigator of the project and LOICZ member, was invited to create a LOICZ Regional Node.

During the meeting in Fortaleza, the research team of the INCT TMOcean decided that Dr. Carlos Eduardo Rezende and Dr. Marcos A. Pedlowski should serve as the coordinator and vice-coordinator of the Regional Node. Since then, the Node has worked to integrate research groups from across South America, including Brazil, Argentina and Uruguay.

In 2016, Carlos Rezende and Marcos Pedlowski were present at the II Ibero American Congress for the Integrated Management of Coastal Areas held in the capital city of Florianópolis that has resulted in a further contacts with an extended community of scholars involved in research projects focused on integrated coastal management.

This REP intends to be a national and international reference aimed at developing a strong network in the South American region concerning the continent-ocean interface and its interactions with economic chains, natural processes and goods and services in face of changes in land uses and global climate. We will also contribute to ongoing efforts to minimize dissimilarities by supporting a strong program in capacity building at all levels of education and training. Another goal is to make accessible to society all results obtained in scientific projects and to make them understandable to all levels of education and, therefore, in a way that the resulting data can be used to drawn consistent scenarios of sustainable development of the coastal zone in the reality of the Anthropocene.

An outcome from the conference was a DECLARATION on “Ecohydrology approach towards implementation of UN SDG’s” of Universidade Estadual Norte Fluminense, Brazil and UNESCO Chair in Ecohydrology: water for ecosystems and societies, Universidade Algarve, Portugal

Main projects and cooperations are part of the joint activities developed by the South American Regional Engagement Partner:

The understanding of the transport, accumulation, cycling and bioavailability of nutrients, organic matter and trace metals in the land-ocean interface will be achieved by comparing different coastal and continental shelf systems along the east-north-northeastern and Southeast-South coastal areas of Brazil under different environmental situations, particularly on the behavior of the fluvial-estuarine continuum under semi-arid (Northeastern coast) humid tropical (North) and sub-tropical humid (Southeastern-south coast) under the intensive human development resulting from pressures due to river damming, water diversion and basin transposition, urbanization, industrialization, agriculture, and aquaculture. The use of environmental geochemical tracers, including both organic and inorganic, natural isotopes and radioisotopes, and historical sets of data and remote sensing analysis will make allow the evaluation of the variation in time of the processes, while paleoenvironmental reconstruction will help understand the response to global climate change.

Moreover, the understanding of the drivers influencing the bioavailability of persistent pollutants (metals and POP’s) and the human exposure to them will subsidy policies related to environmental health.

i) On the environmental geochemistry framework: to evaluate the changes in sediment, organic matter, nutrients and pollutants fluxes from the continent downriver to the estuarine areas with emphasis on changes in basin morphology, erosion and sedimentation of estuaries. A hierarchical typology of such drivers should be achieved in order to balance future planning actions for the watersheds and the coastal zone.

ii) On the human dimensions, the project will evaluate social-economic impacts of the productive chains of artisan fisheries and irrigated agriculture of the basins, with emphasis on water use conflicts, erosion of agricultural lands and sedimentation, and options for mitigation and adaptation. On the global and regional climate change scenarios, the project will analyze changes in biodiversity proxies of global and land use changes, including changing of natural ecosystems and biodiversity to construct future scenarios and propose planning strategies.

iii) Establish international cooperation will allow the buildup of human capacity to decrease regional inequalities and the application of the results to solve local, regional, continental and intercontinental problems.

Research Activities: Vulnerability of the continent-ocean interface and threats to society and sustainability of its systems; Integrate the natural, social and economic disciplines that are necessary to collaborate effectively to create consistent scenarios and problem solving ; considers temporal and spatial scales, with an emphasis on the inclusion of socio-economic surveys; transfer the results to government agencies and participants responsible for providing results to support the activities of these agencies and Development of new concepts, tools and strategies.

PainelMar aims at serving as a multi-sectorial collaborative platform of individuals and organizations on the interface of knowledge and decision-making processes, to qualify policies for the sustainable use and good health of the oceans – illuminating, with qualified information, public policies for the coastal regions and the Brazilian sea. This platform is guided by a Strategic Document that has been progressively elaborated by 50+ Brazilian and international collaborators since the preparatory events for the United Nations Conference on Sustainable Development (Rio + 20).

The Babitonga Bay is the southernmost large representative of a mangrove ecosystem in the subtropical Atlantic (Brazil) and it is surrounded by six coastal urban areas with one million inhabitants and it is the largest metropolitan region of Santa Catarina state. The Babitonga estuary encompasses 75% of the state mangrove areas and holds several critically endangered species of small cetaceans (e.g., porpoises) and marine fishes. In total, there are eight Federal Decrees by the Ministry of Environment designating the Babitonga ecosystem as being of national ecological relevance. On the other hand, this coastal-marine area is intensively used by more than 1,700 fishermen; two large ports are installed there and about other six facing environmental licensing process. In addition, the Babitonga Bay is also influenced by mining, aquaculture and tourism activities, which do not go along without social conflicts and ecological degradation.

This is done through an ecosystems-based project combining transdisciplinary marine social-ecological systems science, an ambitious levels of social participation and very clear policy goals. After one year, the project has regularly engaged with 400 direct resource users in several parallel but interrelated activities. For instance, 177 citizens took part in 19 MSP workshops, while other 180 (six groups, one in each city) took part in a ten-month transdisciplinary course on ecosystems stewardship (or eco-citizenship in Portuguese) with the general objective of engaging with operating coastal and marine ecosystems-based policies and decision-making structures and building new ones to match the Babitonga ecosystem-level. The project thus orchestrates various governmental and societal organizations in co-designing new governing structures such as marine protected areas, as part of a bottom-up and inclusive regional Marine Spatial Planning process. The project was also recently entitled by the Federal government licensing authority with the opportunity to help unifying several environmental monitoring programs that are currently in place for each of the existing ports, into one coherent ecosystems-based monitoring proposal.  So far, previous political resistance from municipal governments, industry, commerce and fishers to designation of a new MPA, which has been proposed since 2005, is been resolved through intense and transparent dialogue and negotiation provided by the project.

Family farmers and fishermen hold a public protest against the negative impacts of the Açu Port on their livelihoods. 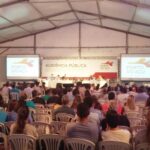 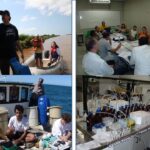